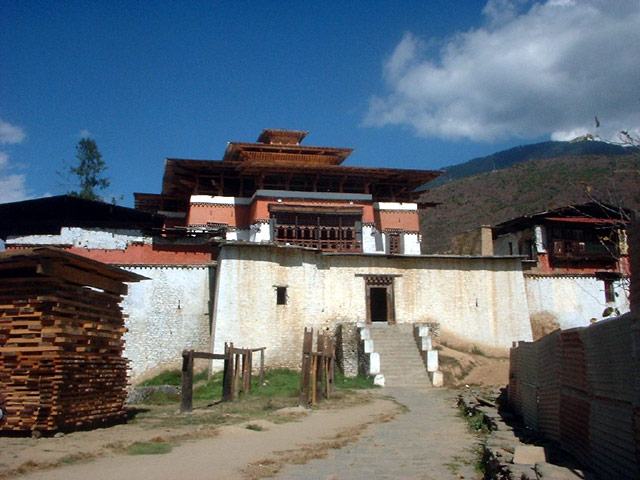 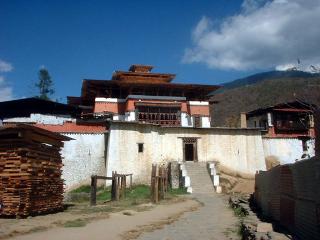 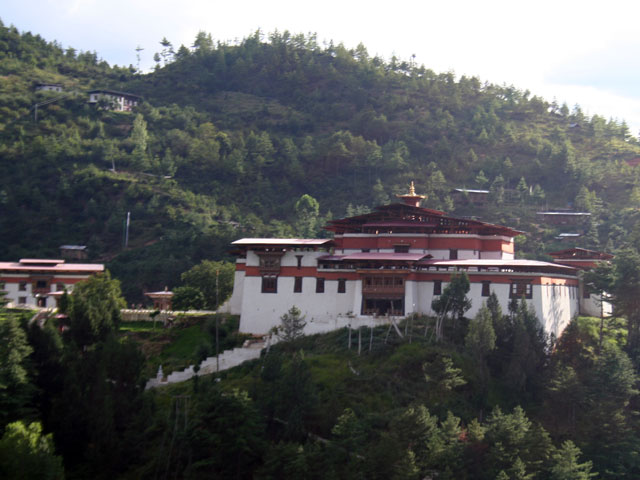 is the first of Shabdrung Nawang Namgyal's Dzong or fortress built in 1629. It is much smaller compared to most other Dzongs in Bhutan. Currently it houses the school for language and culture studies. The graduates of the schools primarily become Dzongkha teachers.

Simtokha Dzong is located around 5km south of Thimphu center. In the valley below the road are the plant-and-soil-protection project, the National Mushroom Centre and the large-red-roofed Royal Institute of Management.

Simtokha Dzong officially known as Sangak Zabdhon Phodrang (Palace of the Profound Meaning of Secret Mantras), Simtokha Dzong was built in 1629 by Shabdrung Ngawang Namgyal. It is often said to be the first dzong built in Bhutan. In fact, there were dzongs in Bhutan as early as 1153, but this is the first dzong built by the Shabdrung, is the oldest that has survived as a complete structure, and is the first administrative facilities. It is the home of the Institute for Language and Culture Studies; the students are both monks and lay people.

The site is said to have been chosen to guard over a demon that had vanished into rock nearby, hence the name Simtokha, from simmo (demoness) and do (stone). Conveniently, the site is also an excellent location from which to protect the Thimphu valley and the valley leading to the Dochu La and eastern Bhutan. The dzong is about 60m square and the only gate is on the south side.

The utse is three storeys high and behind the usual prayer wheels around the outside there is a line of more than 300 fine slate carvings which painted faces depicting saints and philosophers. The large central figure in the central lhakhang is of Sakyamuni; he is flanked by images of eight Bodhisattvas: Jampelyang, Channa Dorji, Chenresig, Jampa, and the less familiar Sai Hingpo (Shritigarva), Dupa Nampasel, Namkhe Hingpo (Akash Garva) and Kuentu Zangpo. The paintings inside this lhakhang are said to be some of the oldest and most beautiful in Bhutan. One of the Lhakhangs, Gen Lhakhang, may be visited only by lamas. In the west lhakhang chapel are paintings of Chenresig, green and white Taras and an early painting of Shabdrung Ngawang Namgyal, which was restored and cleaned in 1995. Large paintings of mandalas and the guardians of the four directions adorn the gorikha (veranda).

During it’s construction Simtokha Dzong was attacked by Tibetans and five Bhutanese lamas who were opposed to the Shabdrung’s rule. The attack was repelled and the leader of coalition, Palden Lama, was killed. In 1630 the Tibetans again attacked and took control of the dzong. The Shabdrung regained control when the main building caught fire and the roof collapsed, killing the invaders. Descriptions of the original Simtokha Dzong were provided by the two Portuguese Jesuit priests who visited here in 1629 on their way to Tibet.

Expansion and restoration of the dzong was performed by the third Druk desi, Mingyur Tenpa, in the 1670s after Tibetan invaders attacked it in 1630. It has been enlarged and restored many times since.