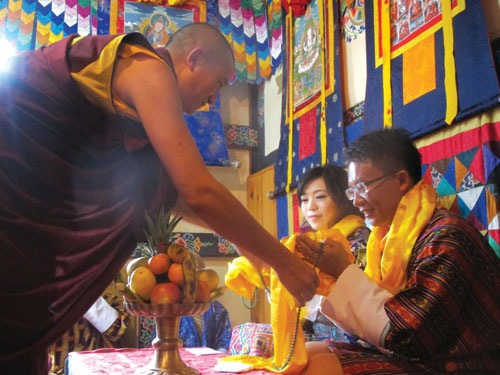 People says marriage are made in heaven and if executed in a place, which still bewitched and make you fall in love with everything that surround you can be something that can engrave in memory forever. Bhutan as destination for marriage is gaining rapid momentum. Wind Horse Tours &Travel organised 3 marriages this year alone. I asked Lisa (name changed) why did you choose Bhutan of all places in the world? She said Bhutan has always been in her bucket lists, could there be any better place to exchange vows but at the backdrop of pristine Himalayas. Another couple  Henry said that after doing extensive research, he had in mind a low key, solemn marriage affairs and it perfectly fit the bill with Bhutanese traditional marriage. Moreover he was always fascinated by the traditional ritual and spirituality associated with it.

Third couple -Mary astonished us lock, stock and barrel, she forbid us to take any picture of the proceeding, she want to have it all in her sense, sensibility and soul, she want to arrest all these emotion to eternity. She said “You only get married once”
Typically, all Bhutanese marriages entail a low key affair, involving close friends, relatives, to the proceeding. Presided by the Lama and many monks supporting the ritual, with the affair tending to 3 to 4 hours, where exchanges of scarves to each other represent exchange of vows. Ending with blessing from lama and monks. Drawing the curtain down with the feast for all friends, relatives, Lama & Monks.
The articles that came in the Kuensel (The National Newspaper of Bhutan) an excerpt as follows:
Seated on traditional wooden chairs and attired in gho and kira, Dr Yang and Ming-ling Chen, from Taiwan, were getting married the Bhutanese way in Paro. Their palms were folded, and as guests offered them tashi khardars (good luck scarves) they bowed their heads.To get married, the couple flew in on April 26 with friends. Yang has halted the night at his Buddhist master Khentrul Rinpoche’s house .at Jangtoe village while Ming-ling stayed in one of the hotels. Dr Yang was the son of the house and Minlg-ling was brought in as a bride from another place. At around 10am, Dr Yang, 39, was in front of the house wearing a silk ai kapoor gho expecting his fiance. His fiance Ming-ling arrived in an SUV adorned with colourful scarves. She was wearing a kishu thara and was ushered in with a chipdrel ceremony.
The two exchanged scarves as they met and greeted each other. A cleansing ceremony, thruesoel began, followed by marchang ceremony. The two were then ushered into the altar room of the three-story traditional house. The two then took the seats and sat shoulder-to-shoulder, grinning from ear to ear.People from the locality took part in the ceremony and offered khadhars and gifts of textile and handicraft products.
This memory I will cherish,he said, adding he was satisfied for he thought he could not get married the Bhutanese way. â€œI have had strong attachment with Bhutan, it’s people and tradition ever since I visited the country 14 years back.â€ It was also, he said, important that he received blessings from his master.
Yang is Western and Chinese medical doctor and Ming-ling Chen is a music teacher in Taiwan. I was expecting to celebrate with Rinpoche’s relatives but it was great that people in the locality came to bless us too,â€ he said. Ming-ling said this was her first visit to Bhutan. The process, which started from the hotel room to the altar, she said made her feel different. It was marvellous, she said. Our friends back home are waiting for the photographs. 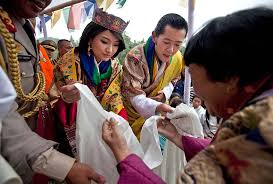 Sherab Wangchuk who served as Wangchang gup before said, as an advanced country Taiwan is rich economically. And they are here because of our rich culture,he said, adding more Bhutanese couples were simply organising dinner or lunch to celebrate marriage.