Our CEO, Ugen Tshering contracted travel bugs, when he was a kid. With time, his wanderlust got worst, finding cure for this affliction took him to many countries; one among them was Kathmandu, Nepal. The first seed of Three Himalayan Kingdom tours was sown in Kathmandu, the chance meeting with an eccentric guest from France was like road to Damascus and it was before the inception of company in 1998. The conversations over the evening tea ended up with the dinner. The Guest was an ardent traveler himself and had traveled every nook and corner of Himalayas regions. His fascination grew progressively with renewed zeal with the enigmatic Himalayas region, at the same time; he made it conspicuous the idea that visiting the region was easier said than done with the intricate of red tape, visa and other travel related issues.
For us, The Three Himalayas Kingdom was more of a dream, conceived in liberty, dedicated to the proposition to make the travelling to these countries easier and hassle-free with added cost effective measures.
As proverbial “there is many a slip twixt cup and the lip”. Mere conceivement was a regal luxury, but the execution of this very idea in realistic sense took much more time than to our liking. The delay was partly due to time consumed in spreading our wings in Nepal and Tibet. We felt that it was of paramount to make our Infrastructure and logistic base strong in Nepal and Tibet. By then we were soundly placed in Bhutan and passion was running high to annex Nepal and Tibet. When we were out-rightly deep in research of the regions, we ran into volatile political climate in Tibet and even Nepal was no exception at that point of time. Political turmoil was rampant in Nepal, there were many moments when we were on the verge of giving up this concept and stick to our core base of Bhutan. In retrospect, we are glad that we persevere with conviction those dark hours and were good learning curve for us. Peace and development in tourism infrastructures are back in reckoning, and have seen an upward rise in Nepal and Tibet. In fact we have successfully done our campaign of Three Himalayas Kingdom for four years on the trot.
Casting aside the political environment in Nepal and Tibet, it still calls for burning midnight oil to engineer a product that serves well to the guests travel needs. First important task was to incorporate the cost effective measure to the maximum so that it become cost friendly as these regions mostly Bhutan and Tibet are renowned for being expensive.
The real flavour of these countries are its best during the festival – fun, frolic, tradition, conventions marks the occasions. As these festival are based on Buddhists lunar calendar, it has higher degree of varying timing every year. Every year our main objective is to coincide the trip with the local festivals of the three countries.
To put to practice best the cost effective measures, we could largely imagine the group journey though it can done privately also but at slightly elevated price. We found that group journey being a melting pot, where guests of different nationalities comes together, sharing the experience under one roof for over 2 weeks usually bring greater elements of camaraderie among themselves. We have seen mere acquaintance being strong friends forever. Moreover our social interaction platforms for group journey are design to assist our guests to interact and become acquainted through exchange of post before the commencement of the trip. We have strive hard to bring forth an environment conducive to thrive these elements of friendliness and this to larger extent brings the pleasure most cherished to all of us.

About Bhutan
Bhutan is a small country in the Himalayas between the Tibet Autonomous Region of China and India. Besides the stunning

natural scenery, the enduring image of the country for most visitors is the strong sense of culture and tradition that binds the kingdom and clearly distinguishes it from its larger neighbours. Bhutan existed in self-imposed isolation up until the 1950s The first tourist group came in 1974, but tourism remained minimal. TV and the internet were introduced in Bhutan in 1999, followed by cell phones in 2003. Now 1:3 Bhutanese have cell phones, including the Yak herders. The King stepped down, to the deep sorrow of his subjects, in 2006. Modernisation is relatively slow here, but that is precisely Bhutan’s charm. It remains unblemished by Western ways. Buddhism here means people go with the flow and strive for serenity. Enjoy the simpler, slower pace of life and be touched by pristine nature, the spirituality of the many Dzongs, Chortens and other sacred sites, as well as the good-natured companionability of the people.

For many, Tibet remained a mysterious land of snows. For many explorers, imperialists and traders, Tibet was a forbidden land of treasures and riches. Many outsiders on spiritual quest admired Tibet as an ideal place hidden with magic and mystery.

Tibet is one of the most remarkable places in Asia to visit. Tibet has many monasteries, breathtaking high-altitude trek routes, stunning views of the world’s highest mountains and very friendly Tibetan people. A trip to Tibet will take you past snowy mountains and turquoise lakes. You will go over many high passes, with prayer flags draping from the hilltops. One may take a limitless adventure on the world’s wildest roads.

Nepal, officially the Federal Democratic Republic of Nepal, is a landlocked sovereign state located in South Asia. With an area of 147,181 square kilometers and a population of approximately 27 million. Nepal is the world’s 93rd largest country by land mass and the 41st most populous country.
The mountainous north of Nepal has eight of the world’s ten tallest mountains, including the highest point on Earth, Mount Everest. It contains more than 240 peaks over 20,000 ft (6,096 m) above sea level.

The southern Terai region is fertile and humid. Lumbini, the birthplace of Lord Gautama Buddha, is located in this region. Previously, the political climate was marked by upheaval and unrest, mainly so during the violet transition from monarchy to federal multiparty representative democratic republic. Since then, peace and development in tourism infrastructures are back in reckoning, and have seen an upward rise.
Weather in the region (Nepal, Bhutan, Tibet)
The nature of being volatile doesn’t only apply to political climate but also to weather, mostly in Tibet, due to its sheer altitude that its town and cities are located, the weather plays spoilsport more often than not. To find a suitable time of year that is conducive to travel to all three fascinating countries was quite a task.

Himalaya’s ranges govern the landscape of these countries, and the defining factor that determines the weather and temperature in the region is altitude. Bhutan and Nepal, by and large enjoy similar kind of weather except Terai (Plain in Nepal) for being in same latitudinal context and in eastern Himalayas ranges. Altitude plays significant role in determining the weather of the region. The weather can vary due to changes in elevation. For instance in Bhutan, Punakha and Wangdue are warmer than Thimphu and Bumthang colder than both, which is due to variation in altitude. And expected temperature on typical day in western Bhutan in March & April can range from 55 F to 61 F during day time. However, generally, the temperature tends to fluctuate dramatically in the span of day and night all throughout the year. For instance, in Thimphu, in Dec, the day can be warm with approx. 65 F and it can drop down drastically to 32.8 F at evening. In Kathmandu, average temperature during April can reach up to 60.8 F and winter can be chilly with 33.8 F.

Undoubtedly, Tibet is one of the harshest places for human existence. Weather there is cool in summer, but excruciatingly cold in winter. In Lhasa, the relatively humane city of the region, although the temperature may exceed 23 degrees C in summer, it can also plummet to minus 10 degrees C in winter! Solar radiation is extremely strong. The sunlight in Lhasa is so intense that the city is called Sunlight City. The thin air can neither radiate nor absorb heat, resulting in temperature extremes during both day and night. 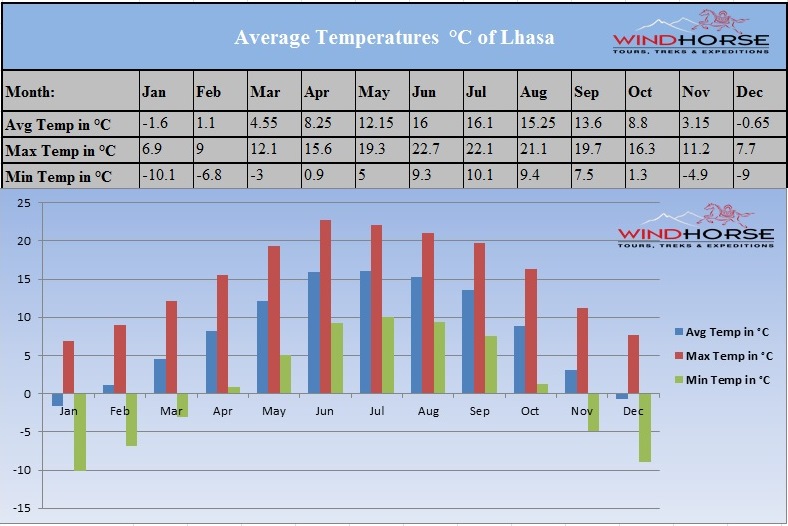 Average Temperature in Lhasa
If you are traveling in Tibet or in the remote areas of Himalayan China, altitude is one of the major factors to consider. Lhasa, the capital of Tibet, is at 11,400 f, and you will be going higher during your travels. It is not only very important that you have physicals conditioning before departing for Tibet but you must also take precautions and necessary medications to prevent High Altitude Sickness. We highly recommend appropriate travel insurance to cover for medications, an emergency evacuations and trip cancellations.
Three Himalayan Kingdom tours encompasses enchanting and enriching cultural odyssey of these three enigmatic countries (Tibet, Nepal and Bhutan) in one single canvass.
Overview of the Three Himalayan Kingdom Itinerary
Day 1: Arrival in Beijing. Day 2: Fly to Lhasa, Tibet (B/D)  Day 3: Lhasa Tour (B/D) Day 4: Lhasa Tour (B/D). Day 5: Yamdrok Tsho – Gyantse (B/D). Day 6: Gyantse – Shigatse – Lhasa (B/D). Day 7: Fly – Kathmandu (B/D) Day 8: In Kathmandu (B/D) Day 9: Fly to Bhutan (B/L/D). Day 10: Paro – Punakha(B/L/D). Day 11: Drive to Thimphu (B/L/D). Day 12: In Thimphu(B/L/D). Day 13: Thimphu – Paro (B/L/D). Day 14: Paro (Takstang Hike) (B/L/D). Day 15: Departure (B)

Starting with a spectacular flight from Beijing, fly into incomparable Tibet. In Lhasa-Tibet’s long forbidden Capital City at 12,000 feet, we will tour the major monuments and power places, including the legendary gold-roofed, thousand-room Potala Palace. A breathtaking flight over the trans- Himalayas whisks you to Nepal’s capital city of Kathmandu, an unforgettable melting pot of Hindu and Buddhist cultures. In the local markets and bazaars, we will rub shoulders with some of Nepal’s very diverse people. Another spectacular and short flight east steers you into Bhutan, where we explore the pastoral back roads of Bhutan. We’ll visit the Shangri-La setting of Paro Valley, the central Bhutanese town of Punakha, with its huge spectacular monastery set by the river, followed by a visit to the capital city of Thimphu. Your trip ends with a flight to Bangkok or other preferred destinations.
Attractions in Lhasa (Tibet)
The sights listed below are within the itinerary framework. Though the itinerary is resilience, depending on time availability, we can further incorporate other activities like walk around the market, park, cultural performance during dinner etc.
1. The giant Potala Palace 2. Sera Monastery one of the largest Gelugpa institutes of Tibet. 3. Jorkhang temple, considered the holiest in entire Tibet. 4. Drepung Monastery 5. Mentsekhang (traditional hospital) 6. Norbulingka.
Excursion to Turquoise blue Yamdrok Tso Lake, this is one of the four holiest lakes of Tibet and the home of wrathful deities.
Attractions in Kathmandu (Nepal)
1. Kathmandu Durbur Square 2. Walk through Asan and Indrachok market 3. Pashupatinath temple, 4. Boudanath Stupa. 5. Bhaktapur city
Attractions in Thimphu (Bhutan)
1.Tashicho Dzong, the main seat of the Government 2. Vibrant local farmer’s market 3. Memorial Chorten 4. Takin Preserve 5. View Point 6. Zilukha Nunnery 7. Indigenous Hospital 8. Traditional Art school 9.Textile Academy & Museum 10. Zangdoperli Temple 11. The giant Buddha statue, said to be the largest in the world.
Attractions in Punakha & Wangdiphrodrang (Bhutan)
1. 108 Chorten at Dochula pass 2.Chimi Lhakhang temple, dedicated to Lama Drukpa Kunley (1455 – 1529), popularly known as the divine madman, a folk hero and a cultural icon. 3. Majestic Punakha Dzong 4. Walk up to Khamsum Yuley temple on Nyinzergang hill,
Attractions in Paro (Bhutan)
1. Beautiful 7th century Kichu Lhakhang 2. Dumtse Lhakhang temple, known to hold some of the finest murals in the kingdom. 3. Rinphung Dzong and Ta Dzong.4. Famous Taktsang monastery hike.
Visa
For issuance of Tibet permit, Chinese Visa is mandatory, which you have obtain on your own from nearest embassy, copy of it to be sent via email, then we will process the Tibet permit. For Nepal, visa upon arrival can be avail. For Bhutan, We will take care of the Visa.