Nepal, officially the Federal Democratic Republic of Nepal, is a landlocked country in South Asia. It borders Tibet in the north and India in the south, east, and west. Bhutan is separated from it by the Indian state of Sikkim. Nepal has a diverse geography, including fertile plains, subalpine forested hills, and eight of the world’s ten tallest mountains, including Mount Everest, the highest point on Earth. Kathmandu is the capital and the largest city. Nepali is the official language of Nepal, other languages of the different ethnic groups have also been recognized as the national language.

Nepal has an area of 147,516 km2 (56,956 sq mi). It lies between latitudes 26° and 31°N, and longitudes 80° and 89°E. Nepal falls in the temperate zone north of the Tropic of Cancer. The entire distance from east to west is about 800 km while from north to south is only 150 to 250 km. Nepal is divided into three regions, the mountainous region, the hilly region, and the Terai region. The mountainous region ranges from 3000 m up to the height of 8848.86 m to the border of Tibet. The Hilly regions lie between 1200 m to the subalpine zone above 3000 m in altitude. The Terai region is a lowland region in northern India and southern Nepal that lies south of the outer foothills of the Himalayas, the Sivalik Hills, and north of the Indo-Gangetic Plain. This lowland belt is characterized by tall grasslands, scrub savannah, sal forests, and clay-rich swamps. The altitude ranges from 60 m to 300 m. 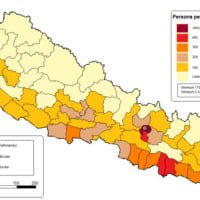 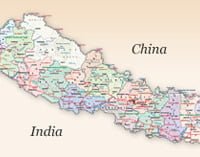