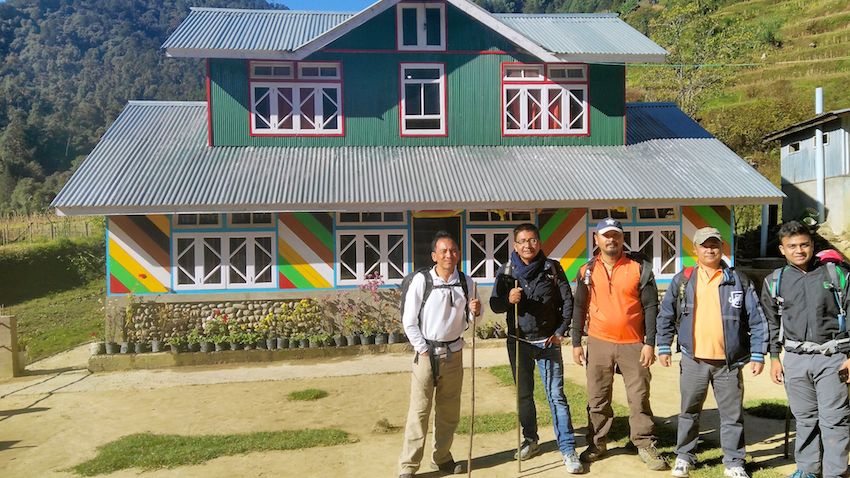 In the equation of time, the changes or evolutions  constantly grows around us so is its dynamics. On 24 Oct, 2016,  A band of 4 men  from Wind Horse Travel and an old school friend – Sameer Lama, went on a recce to Sandkhaphu trek, unlike three of us, for two it was first time. Naturally, over the time, it went through sea changes in term of physicality of the areas. However, beneath the facade of the changes, the essence invariably remains same such as houses in villages may have grown in numbers but the people still radiates warmth and hospitality with same fervour as before. Narrow trails have given way to paved roads but the surrounding forests still smell the same. The air  oozes out same freshness. Most importantly,  gamut of mountain peaks still stand true where I left  22 years ago, enveloping same aura of charms and unyielding beauty.I suspect, if any trek in the world can boast of showcasing 4 (Everest, Kanchenjunga, Makalu, Lotse) out 5 highest peaks in the world but  the Sandhakphu trek thus  the title word “Superlative”.

From Darjeeling, its a scenic drive, traversing the forests of tall pines and conifers to the Maneybhanjang -the trail head. There are many versions to do the trek, shorter on time we chose to drive till the Sandhakphu. However we made stops enroute at villages at regular interval primarily to take the stock of changes that has befallen and to stretch our legs. The road is tarred at many stretches but largely it was rustic, rugged and resembling like a widened mule tracks as a road in some places, this also spells a bumpy ride for us. It took almost 4 and half hours to reach  Sandhakphu including as many stops. It was late afternoon and cloud had taken charges to censor the mountains views  but much to our delight, we learnt about the great weather  next day. Although aches and stiffness in body was rampant but idea of rendezvous with the superlative triumphed over the existing discomfort. The unusual early dinner and bed were need of the hours and  the sleep was not so far.
Our CEO -Ugen Tshering -an early riser, we found him in the state of awe struck and dazed when we woke up, for he confronted with rarity outside at 3 am – surreal ambience with clear sky, bright flawless moon and clusters of stars (divine chaos) – a cosmic drama  and appeared to him  at such a close quarter that he felt he could touch it by stretching his hand. 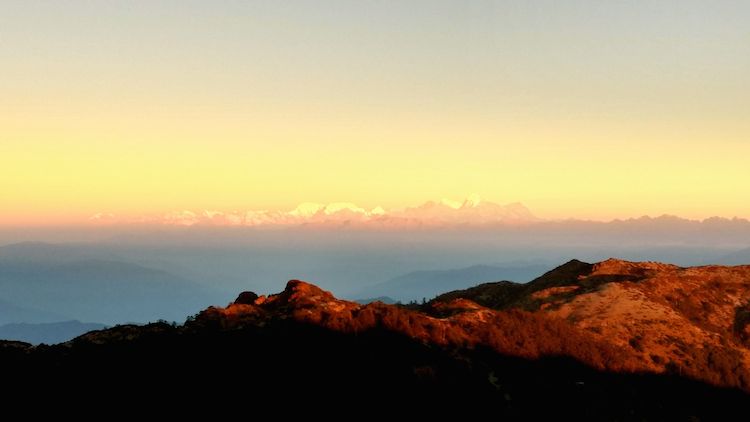 At 3636 m -Sandakphu summit, early morning chill took a backseat in front of astounding view of the Eastern Himalayan mountain peaks that greeted us. There were many other trekkers emanating “wow” sound and a few grasping for breathe not for sheer altitude but for beauty that lies in front.
At 7am, the trek started, we planned to do Sandhakphu – Phalut – Gorkhay – 36 km. The reason was we already did before the other route like Sandhaphu – Phalut – Molley -Rammam – Sirkhola – Rimick. Especially from Phalut to Gorkhay was unexplored by any of us and motivation was running high to scale it even though others trekkers found it to be absurd in the sense of covering 36 km in a day. The trek till Phalut is 21 km, involving walking on the ridge that offers some breathe taking views of mountains and vegetations with occasional strenuous uphills walk but largely gentle. However the last 2 km to Phalut was steep and to me monumental, the rest house at Phalut appears so close yet it was so far away.It tested fitness level and power of endurance for many.  Unsurprising,  I was last to reach. 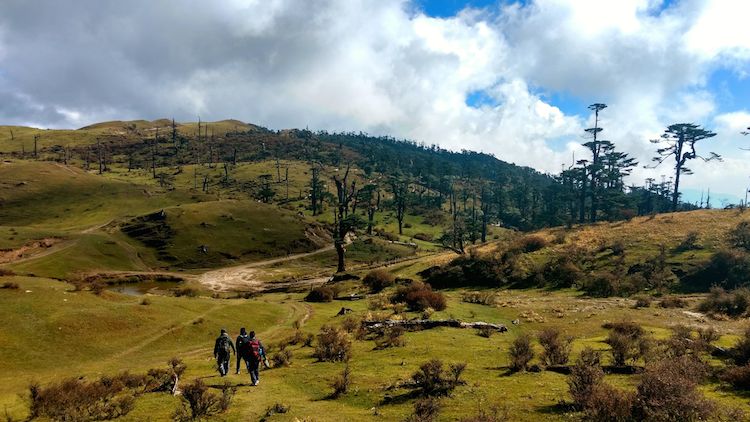 After resting in Phalut, at 2.30 pm, we resume our hike to  Gorkhay (15 Km), It is all downhill through thick temperate forest. We were racing against time to reach our farm house stay in day light but the tiredness, and earlier night at north east India had other idea. We still had a few kilometer before the evening rapidly befell upon us. There were moments of difficulties to walk with light of battery torch. It was 15 minutes shy to 7 pm when we reach our peculiar  sounding Farm house – Denver Gallery. Truly, it was marathon walk of 36 km in a day so was the efforts on our part to cover it. By the time we reached our farm house we were shabby, exhausted, hungry, drilled and down  but certainly not OUT. 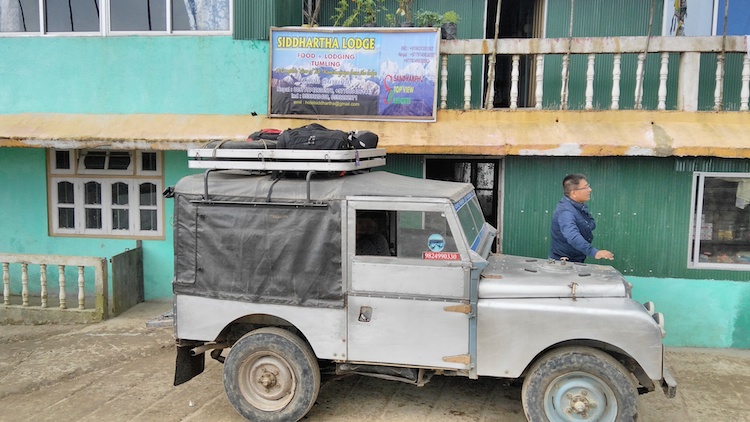 After sumptuous dinner  and restful sleep, we woke up to the sound of Gorkay river gurgling below. And it was last day of trek but not before hiking for 2 hours across a few sleepy hamlets along the route to Varang in Sikkim. We hired a MUV vehicles till south west town of Jorethang. And from there, we hired different another vehicle to Phuentsholing in Bhutan. As I lay rested on the backseat of car on the way to Bhutan, the memories of early morning majestic mountain peaks from Sandkhaphu summits played soulfully in my mind. This reminded me of Wordsworth’s poem “Solitary Reaper” last stanza
” I listened, motionless and still;
And, as I mounted up the hill,
The music in my heart I bore,
Long after it was heard no more.”
We have a group of guests doing this Trek in April, 2017, and now, we are in great position to make  it count for them. 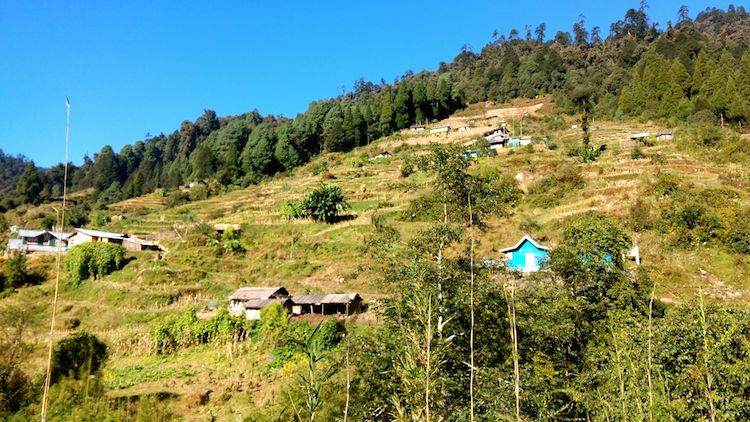 Sandkhaphu Trek – Rendezvous with the Superlative.