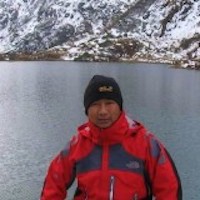 Dawa Lama hails from queen of hills – Darjeeling. He is well versed in cultural aspects but his love for mountains, wilderness of Trek is more profound. For his love for the trek, he treaded many paths less travelled. He feels at peace and at home in mountains and he believes that being in mountain  is being close to his root and to his very existence. To give wings to  his passion, he enlisted in mountaineering course in H.M.I. Darjeeling and disaster management course and completed in flying colours after one and half years .

Following the tradition, he started as a a cultural guide in 2008, simultaneously, he was pursuing his degree course also and completed in 2004. His early education  was in school run by Jesuits father. He grew up watching the sun rises at far horizon of eastern Himalayas from Tiger hill, which still is one of his favorite place.