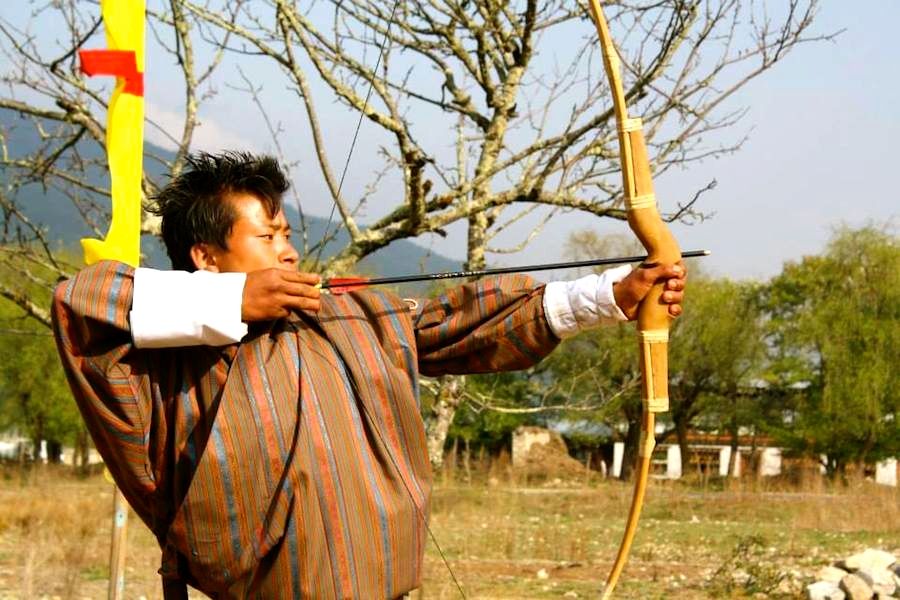 Archery is both the favorite pastime and the National Game of Bhutan. 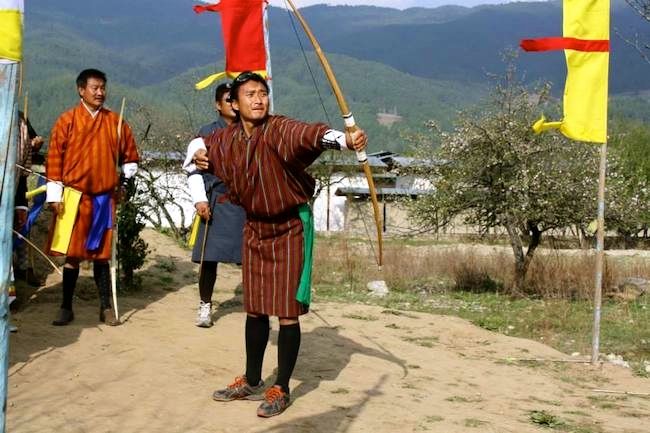 Archery in action with Traditional Bow and Arrow.

Since time immemorial Bhutanese have been passionate about their national sport of Dha (archery). Nearly all villages in the kingdom boast an archery range and each dzong has a space set aside nearby for a bha cho (field of target). Competitions are a riot of colour and excitement, with two teams in traditional dress shooting at small wooden targets placed 140m apart (Olympic standard is 50m).

The distance is so great that team members gather dangerously close to the target to yell back how good the archer’s aim was. This is often accompanied by howls, chanting, encouragement and jokes. Members of the opposing team may shout back how terrible the archer’s aim is and make ribald remarks. When an arrow hits the tar­get, team-mates perform a celebratory slow-motion dance and sing the praises of the shooter, who tucks a coloured scarf into his belt. For major tournaments each team brings its own cheerleading section of girls decked out in their finest clothes. They perform dances in between play, and dur­ing the shooting they do brief routines and shout lewd and disparaging comments about the opposing archer’s parentage or sexual prowess.

Tradition has it that women are not allowed to touch an archer’s bow, and it is believed to decrease performance if an archer sleeps with a woman the night before a contest. The traditional Bhutanese archery equipment is a long bamboo bow. Most archers nowadays use a state-of-the-art carbonite Hoyt brand bow with a complicated-looking pulley system that releases the arrows with tremendous speed. The use of imported equipment hasn’t diluted the rich traditions of the game, although Bhutanese archers are now encouraged to train for the Olympics. International coaches who have trained Bhutan’s Olympic archers have been impressed with the natural talent and think that, with expert coaching, Bhutan could possibly win an Olympic medal one day.

The national newspaper, Kuensel, urges young archers, including women, ‘It is time to shoot beyond participation’. The Bhutan National Archery Federation organises two national archery tournaments a year, one with traditional bamboo bows and one open to archers using modern imported equipment. The traditional bow tournament takes place in Dechenchoeling in May. Archery matches are among the most picturesque and colourful events you’ll find here and well worth a visit. There are formal competitions on many weekends, and archers practise most after­noons and weekends when there is no competition. It’s easy to find a session to watch the National Game of Bhutan quite easily when your are travelling around.