Nowhere in the Himalayas is the natural environment more rich and diverse than it is in Bhutan. One of Bhutan’s ancient names  was Menjong Yul, meaning ‘the land of Medicinal Herbs’ and so rightfully. Even today, natural environment is mostly in undisturbed and pristine form. The ecosystem in Bhutan is diverse, because of its location, great geographical and climatic variations. Bhutan’s high, rugged mountains and deep valleys are rich with spectacular biodiversity, making one of the world’s ten most important biodiversity ‘hotspots’. For centuries, Bhutanese have treasured the natural environment and have looked upon it as the source of all life. This traditional reverence for nature has delivered Bhutan into the 21st century with an environment still richly intact. The country wishes to continue living in harmony with nature and to pass on this rich heritage to its future generations.

Knowing the importance of the natural environment, Royal Government of Bhutan takes its conservations at the heart of its development strategy. Royal Government of Bhutan has also committed in maintaining more than 70 percent forest cover for all time to come. Currently the total land under forest cover is 72.5 percent and more than 26 percent of the land is under the protected areas, comprising of four national parks and about 9 percent of the land fall under biological corridors so that the wild life sanctuaries and nature reserves connect protected areas.
Fortunately for Bhutan, maintaining a balanced natural ecosystem remains the central theme of its development process. The country’s development policies disregard sacrificing its natural resource base for short term economic gains and are consistent with the central tenets of sustainable development, environmental conservation and cultural values.

In 1998, Bhutan was identified by Norman Myers as one of the ten bio-diversity hot spots in the world. It has been identified as the centre of 221 global endemic bird areas. The country signed the Convention on Biological Diversity and United Nations Framework Convention on Climate Change in Rio de Janeiro in 1992. These conventions were ratified in 1995 at the 73rd session of the National Assembly. The Royal Government of Bhutan has also made a national commitment to uphold its obligation to future generations by charting a path of development called the “Middle Path” – this is the development which upholds both environmental and cultural preservation as an integral part of the development process. 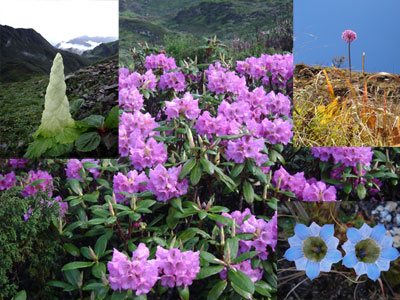 Bhutan Flora – Bhutan has a rich and varied biological diversity and declared as one of the tenth bio-diversity hot spots in the world. Very few countries in the world match Bhutan’s biological diversity and fewer still have taken such strong steps to conserve their biodiversity. Bhutan, for example, has its own Biodiversity Action Plan. The country ranks amongst the top ten percent of highest species density (species richness per unit area) in the world, and it has the largest proportion of land under protected areas.

Regarding diversity at the species level, inventories have indicated that over 5500 species, including 300 species of medicinal plants and over 50 species of rhododendrons. Of the more than 600 species of orchid, most are commonly found up to 2100m, although some hardy species thrive even above 3,700m.

Tropical evergreen forests growing below 800m are repositories of unique bio-diversity. The next vegetation zone is the subtropical grasslands and forests found between 900m and 1800m. The tree rhododendron is found in this zone, along with forest of oak, walnut and sal, and numerous variety of orchid. Temperate zone is a region of great diversity, largely influenced by the elevation. The tropical vegetation of the lower zones gives way to dark forests of oak, birch, maple, magnolia and laurel. Above 2400 altitude is the home of spruce, yew, and weeping cypress, and higher still, growing up to the tree line, is the east Himalayan fir. Between the tree line and the snow line at about 5,500m are low shrubs, rhododendrons, Himalayan grasses and flowering herbs.

Bhutan’s national flower, Blue Poppy grows above the tree line 3,500 – 4,500m elevation and can be found atop some high passes from the far eastern parts of the country all the way across to the west.

Because of its unique setting and relatively un-exploited environment, Bhutan probably possesses the greatest
biological diversity of any country of its size in Asia. It certainly contains some of the best remaining representatives of habitat types found in the Himalayas.

Along its southern border, the narrow tropical and subtropical belt supports the Asiatic elephant, greater one-horned rhinoceros, gaur, wild water buffalo, hog deer, tiger, clouded leopard, hornbill, trogon and other mammals and birds characteristic of indomalayan species. Only 150 kilometers to the north, high Himalayan fauna include the blue sheep, Takin, musk deer, snow leopard, wolf and other species characteristic of the Pale arctic realm.
So far 770 species of birds have been recorded in Bhutan which reflects the Kingdom’s wide range of agro-ecological environments, from subtropical to alpine and its location at the northern edge of the Zoogeographical oriental region and the permeable and fluid border with China. Also country is famous for wintering populations (about 350 birds) of the vulnerable black-necked crane in the valleys of Phobjikha, Bomdeling and Gyetsa. Blue Sheep in Yaksa. 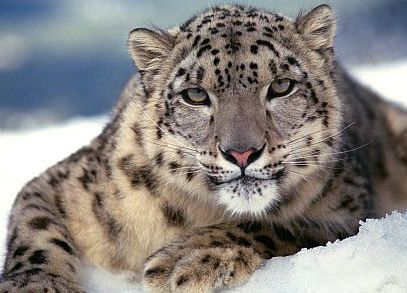 For many countries, poaching, retaliatory killing in response  to livestock losses has plagued the conservatory efforts for endangered species, however, in Bhutan to a large degree the religious propensity of people and sustainable compensative measure in place and and general awareness  have led to resounding success in this venture. According to recent census it is found to have remarkable rise in population of endangered Snow leopard.

Bhutan’s history of isolation and policy of sustainable development provides decision makers with a unique opportunity to conserve the country’s natural and cultural heritage. As a first step in conserving its natural heritage, Bhutan has established a system of nine protected areas. The system sets aside approximately 26% of country’s total land area in national parks, nature reserves, wildlife sanctuaries and conservation areas.

Kingdom established its national park system to protect important ecosystems, and they have not been developed as tourist attraction. In many case people even won’t be aware that they are entering or leaving a national park or wild life sanctuary. 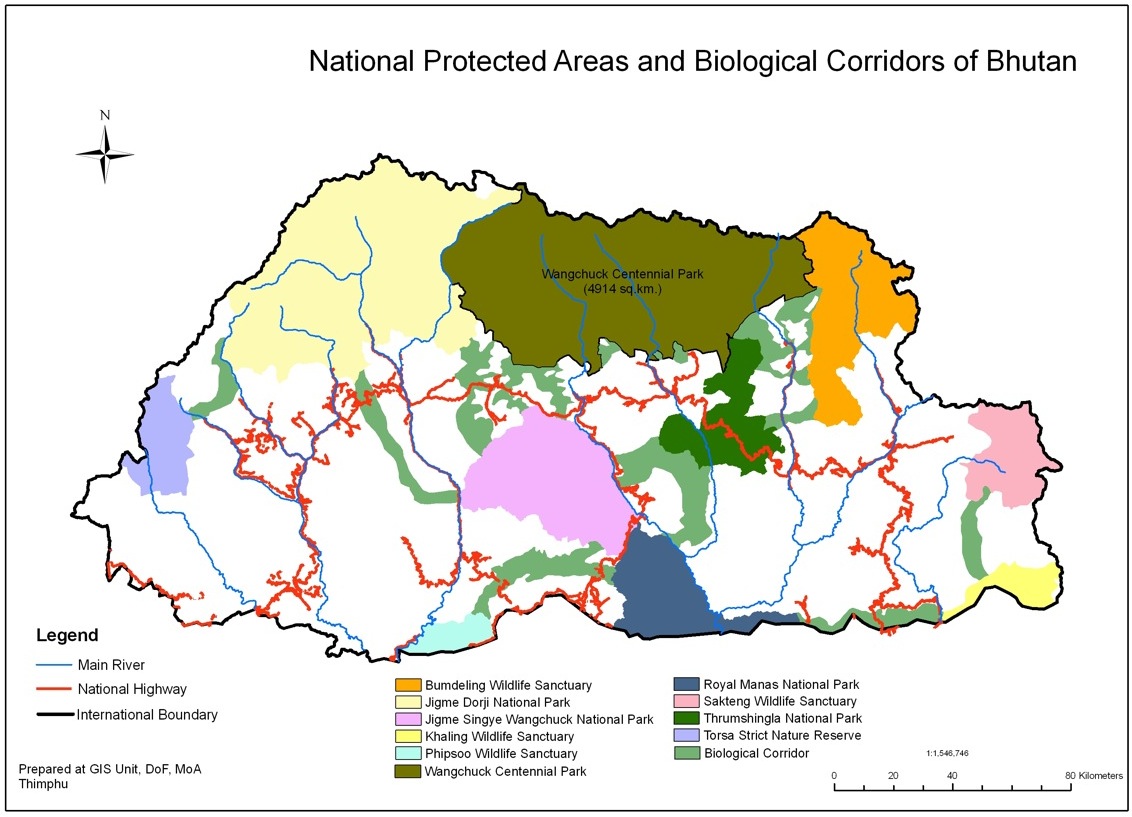 Map for Protected Reserve in Bhutan

Jigme Dorji National Park
It is the largest protected area in the country, encompassing an area of 4,349 sq. km, covering the western parts of Paro, Thimphu and Punakha and almost entire area of Gasa district. The park is habitat of several endangered species including takin, blue sheep, snow leopard, musk deer, Himalayan black bear and red panda. The trek from Paro to Choolhari, Lingshi, Laya and Gasa goes through this park.

Kulong Chhu Wildlife Sanctuary
This reserve with an area of 1, 300 sq km is a large area of alpine tundra. The sanctuary protects the sambar and adjoins the Bomdeling conservation area, which is an important roosting place of black-necked cranes.

Sakteng Wildlife Sanctuary
This is in the easternmost part of the country protecting 650 sq km temperate forests of eastern blue pine and rhododendron. This sanctuary is rumoured for sighting yeti, yes the legendary abominable snowman.

Toorsa Nature Reserve
Located in western part of the Ha district where Toorsa river enters from Tibet. This 644 sq km reserve was established to protect the temperate forests of far west Bhutan. 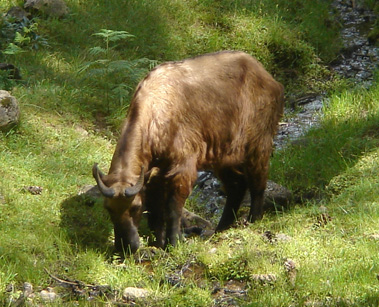 In 15th century, Saint Drukpa Kuenley, popularly known as “the Divine Madman”, went to attend a large congregation of devotees gathered from around the country to recieve a blessing from another Saint. A group of people mockingly demanded to see his magical power. The saint, in his usual unorthodox and outrageous way, demanded that he first be served a whole cow and a goat for lunch. He devoured these with relish and left only the bones. He then took the goat’s head and stuck it onto the bones of the cow. And then with a snap of his fingers he commanded the strange beast to rise up and graze on the mountainside. To the astonishment of the people, the animal arose and ran up to the meadows to graze. This animal came to be known as the Dyiong-gyem tsi (takin) and was later selected as the national animal based on both its uniqueness and its strong association religious history and myth.

The takin continues to befuddle taxonomists, who cannot quite relate it to any other animal. Some call as ‘beestung moose’, referring to its humped nose and similarity in size to the North American moose. Taxonomists have now put it into a class by itself, Bu-dorcas taxicolor.

In summer, takins graze in sub alpine forests and meadows above 3700m. By migrating they escape the leeches, mosquitoes, horseflies, and other parasites of the monsoon swept lower valleys.
They mate in the summer and the gestation period is between seven – eight months. The young born, usually a single calf are born between December and February. They are black in contrast to the golden yellow and brownish coat of the adults.

Around autumn the make descent to the lower valleys. They do this in stages, grazing as they descend. They arrive at the winter grazing grounds in temperate broadleaf forests between 2000m and 3000m by late October.

Hunting is banned by law, and poaching is limited since there is no high economic value placed on the body parts of the takin. In traditional medicine, however, the horn of the takin, consumed in minute amounts, is supposed to help women during a difficult childbirth.
The major threats that the takin faces are competition with domestic yaks for food in the alpine regions and loss of habitat in the temperate regions. 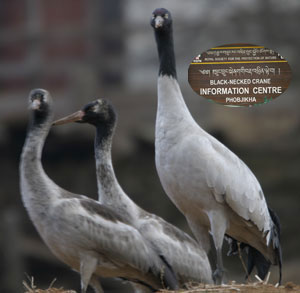 Black-necked Crane or Thrung Trung Karmo as this bird is passionately known in Bhutan is subject of many Bhutanese songs and folklore. They are seen among the painting on the walls of temples and Thankga. These endangered species of cranes migrate from Tibet in late autumn and typically stay till the mid march. Black-necked Crane, is a large bird and medium-sized crane, up to 139 cm (55 in) long, 235 cm (7.8 ft) wingspan and 5.5 kg (12 lbs). It is whitish-gray crane with a black head, red crown patch, black upper neck and legs, and white patch to the rear of the eye. It has black primaries and secondaries. Both sexes are similar.

The Black-necked Crane is distributed in Pakistan (Kashmir region), China, India, Bhutan and Vietnam. It breeds on the Tibetan Plateau, with a small population in adjacent Ladakh, India-occupied Kashmir and Pakistan-administered Kashmir (PAK). It has six wintering areas, mostly at lower altitudes in China, notably at Caohai Lake, but it also winters in Bhutan. In India, the crane breeds near the high altitude lakes of Ladakh such as Tso Kar Lake.

The Black-necked Crane is one of the spiritual creatures for the people of the area and is pictured alongside many of their deities in the monasteries of the region.The estimated population of the species is between 5,600 and 6,000 individuals. The major threat to its survival are the cultivation of its breeding grounds. It is legally protected in China, India and Bhutan.The Black-necked Crane is evaluated as Vulnerable on the IUCN Red List of Threatened Species. It is listed on Appendix I and II of CITES. Conservation and protected area of Black Necked Cranes in Bhutan are in Phobjikha Valley and in Bomdila.