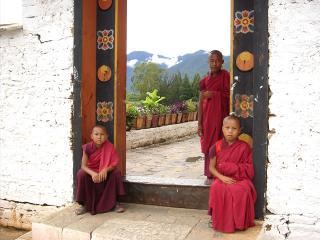 Tachogang lhakhang is located along Paro-Thimphu highway, just after Isuna village and before Chhuzom, on the base of a mountain across the Pa chu river. It was built in the early 15th century by the great iron bridge builder and Poet - Yogi Thangtong Gyalpo(1385-1464), who also built Dungtse Lhakhang in Paro and many iron bridges throughout Bhutan and Tibet. The temple is privately run by the descendents of Thangtong Gyalpo.

Tachogang means ‘temple of the hill of the excellent horse’. It is said that while Thangtong Gyalpo was meditating here, he had a vision of the spiritual horse Balaha-an emanation of Avalokiteshvara. He decided there upon to build a temple at this spot, in addition to one of his famous iron bridges later carried away by floods in 1969. A traditional style bridge with iron chains was restored in 2005. The temple is privately run by the descendents of Thangtong Gyalpo.