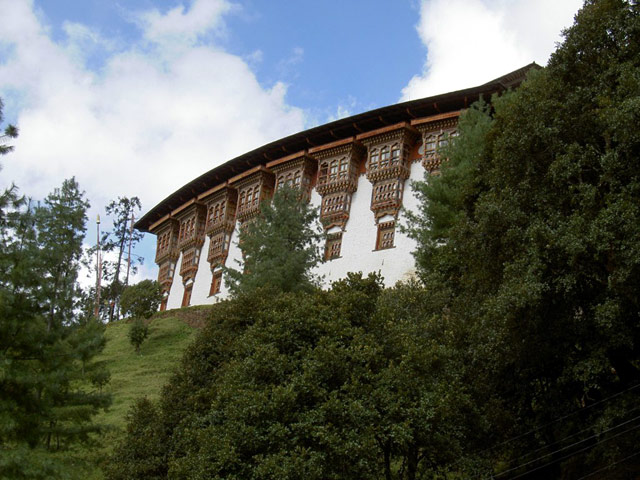 Driving up the valley the road crosses to the east side of the Wang Chhu at Begana, near a training facility operated by the electricity department. A few kilometers beyond this, 12km from Thimphu, a road leads east and climbs a short distance to a parking lot. The trail to Tango Goemba is a climb of 280m and takes about half an hour if you follow the steeper shortcut, or about an hour if you take the longer, more gradual trail.

Lama Gyalwa Lhanangpa founded the goemba in the 12th century. The present building was built in the 15thcentury by the “divine madman”, Lama Drukpa Kuenley. In 1616 Shabdrung Ngawang Namgyal visited Tango Goemba and meditated in a cave nearby. His meditations helped ensure the defeat of an invading Tibetan army. The head lama, a descendant of Lama Drukpa Kunley, presented the goemba to the Shabdrung, who carved a sandalwood statue of Chenriseg, which he installed in the monastery.
The picturesque three-story tower and several surrounding buildings were built in the 18th century by the eighth Desi (secular ruler), Druk Rabgye. The Shabdrung Jigme Chhogyel added the golden roof in the 19th century. Tango is the residence of an important young trulku (reincarnate lama) who is recognized as the seventh reincarnation of the highly respected fourth desi, Gyalse Tenzin Rabgye, whose previous incarnation passed away in 1830.