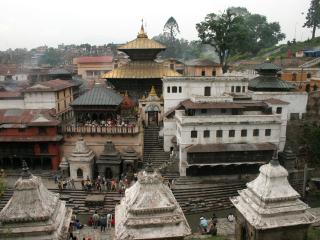 The holiest Hindu Temple of Nepal.

When Lord Shiva came to area of Sleshmantak Forest in the form of a male deer to escape from his boredom; he became famous as the lord of Animals- Pashupatinath. When he was identified and people tried to grab him, a piece of horn fell off, which changed into the form of lingam and a temple, was built on the site. Today, millions of Hindu pilgrim visit Pashupatinath and is regarded as one of the most venerated of the Hindu Temples in the world. The temple itself is a gold gilded, multi-roof pagoda, with golden pinnacle, silver door with fine wood carving. It is believed to have been existence since 1st century. It is located on the bank of Bagmati River, one of the major tributaries of Gangas and hence it's a holy river. The river has several cremation ghats. Hindus are cremated along the bank of Bagmati River to secure his place in the heaven.