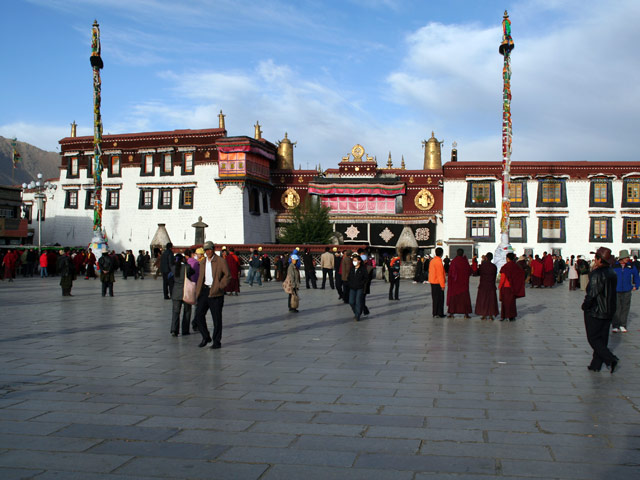 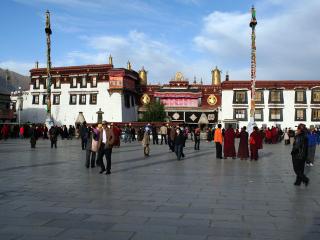 Tibet's Holiest and most revered site.

The Jokhang Temple, a revered Buddhist temple located in the Barkhor Square of Lhasa was built by King Songtsen Gampo in about 642 AD. This temple is a UNESCO World Heritage Site and was originally called, Rasa Tulnang Tsuklakang (House of Mysteries). In the 11th century a learned Buddhist monk named Atisha, taught here and it was after that, that the Jokhang temple got recognition. Today the temple covers an area of about 25,000 sq. ft. The Jokhang temple is a four-storeyed structure. The style is basically Indian in its approach but has been well blended with Nepalese and well as Tibetan influences. The roofs of the temple are gilded with bronze. The rooftop has statues of two golden deer surrounding a Dharma wheel. This is one of the most revered images in entire Tibet and for the practitioners of Tibetan Buddhism. As you enter the Jokhang temple complex, you can see many shrines and rooms that are well decorated. The primary chamber is a hall which houses the Jowo Shakyamuni Buddha statue, one of the most venerated objects in Tibetan Buddhism. There are also other statues of Guru Rimpoche (Saint Padmasambhava), King Songtsen Gampo, his wives, Wen Cheng of China and Bhrikuti of Nepal.

Jorkhang Temple is holiest and most sacred site in Tibet where devout Buddhists make their pilgrimage, sometimes performing prostration (3 steps, 1 prostration) throughout their journey. It is said that pilgrims may take as long as 17 years to complete their pilgrimage on foot. Songtsen Gampo built this temple during his reign in the 7th century. Located in the heart of old Lhasa, the site of the Temple was once a lake. It houses one of the 2 rare Buddha statues Princess Wenchang had brought over from China, the latter credited for introducing Buddhism into Tibet. The temple was further expanded under the rule of the 5th Dalai Lama. Today, the temple houses other precious and sacred relics