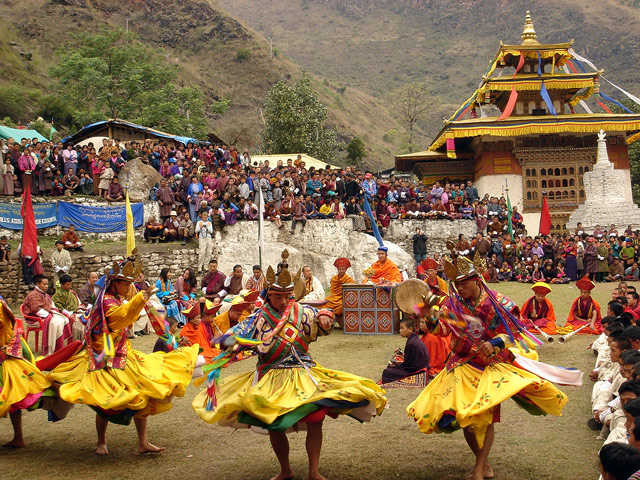 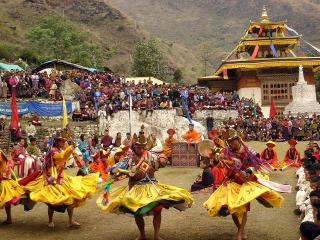 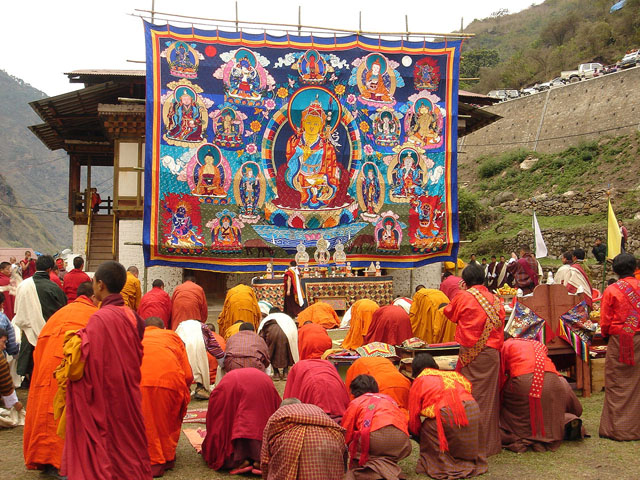 Around 13kms beyond Chazam (22km from Trashigang) on the road to Yangtse is an extraordinarily picturesque temple, just beneath the road, surrounded by terraced rice fields, called Gom Kora or actually Gomphu Kora (Gomphu meaning Mediation Place and Kora means Circumambulation). Guru Rinpoche meditated here and left a body impression on the rock. It is believed that Guru Rimpoche subdued an evil dragon here crushing it into the rock leaving impressions of the dragon's body and his hat. Guru Rimpoche also hide a Tshebum or vase containing the water of immortality inside the rock. Pilgrims may be fortunate to have opportunity to taste the water if it trickles out of the rock when they visit. The temple was built here in 17th century by Minjur Tempa, above the large rock with meditation cave underneath. There are many relics inside this two-storey temple and the murals are said to date from its original construction period. The pilgrims revere it as a sacred power place and circumambulate the meditation cave. The pathway around the cave includes a narrow, twisting passageway through which pilgrims crawl and wiggle to test their negative past actions. In March/April, a three-day festival is held here, which is quite unique from other Tsechu around Bhutan. Pilgrims circumambulate the Goemba aruond the large rock throughout the night during the festival. Many nomadic tribes from Merak and Sakten also come here during this period and for many of whom, the evening event results in marriages.