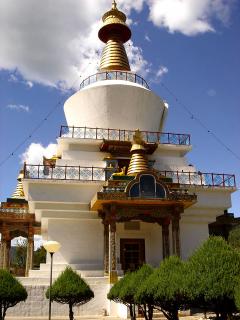 is probably the landmark of Thimphu

The memorial chorten is one of the most visible landmarks of Thimphu, built in 1974 to honor the memory of third King Jigme Dorji Wangchuk. It is a four-storey chorten decorated with richly carved annexes facing the cardinal directions, and features elaborate mandalas, statues and a shrine dedicated to the popular third king. There are numerous religious paintings and tantric statues housed inside, reflecting both peaceful and wrathful aspects of Buddhist deities from complex tantric teachings. Throughout the day people circumambulate the chorten, whirl the large red prayer wheels and pray at a small shrine inside the gate. The early morning is particularly tranquil as elderly people shuffle in and spruced-up kids on their way to school whiz in and out to pay homage.

Memorial Chorten: This landmark of Thimphu was built in 1974 in the memory of third King, Jigme Dorji Wangchuk, who is popularly regarded as Father of Modern Bhutan. It is a four-storey tall white building, containing statues and iconography of deities from complex tantric teachings and serves as an important place of worship for Thimphu residents, as well as from other parts of the country.