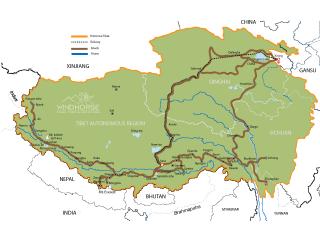 Nechung Monastery just below Drepung has an important place in the history of Tibet. It is the seat of Nechung, Tibet's State Oracle and abode of protector deity Pehar. The oracle Nechung was the medium through whom deity Pehar Gyalpo would communicate. The first temple at Nechung was constructed in 12th century. Dalai Lamas would not take major decision without first consulting with Nechung. Nechung’s association with Dalai Lamas started from the second Dalai Lama and when the Great Fifth Dalai Lama gained temporal power in 1642, he instituted Nechung as the Protector of the Tibetan government. The present Nechung Lobsang Jigme was appointed in India and lives in Dharamsala.